I pray that everyone had a wonderful weekend!  I enjoyed mine despite the FREEZE that came out of nowhere!!! Last week it was very warm in the 80’s I believe and then Sunday morning I woke up to this…. 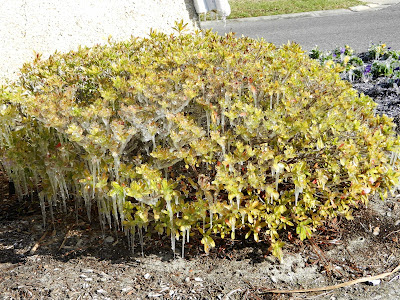 Anywho, I’m sure you all heard the sad news of Whitney Houston’s passing.  My heart goes out to her family, especially her daughter, who ofcourse isn’t doing very well hence her trip to the hospital shortly after.  Her voice was angelic and I’m sure she’ll be missed.

Church service was amazing as it always is!

Sorry you can’t see the shoes that well, but I also wore them here.

The sermon was about “Knowing Where You’re Headed”

He gave us a story that brought it all together.

So the way this story relates to us is this….The Bible gives us explicit instructions on how to make it to heaven!  We can’t get there “our way” and contrary to popular belief, good deeds alone won’t cut it.  We have to know Jesus and have a relationship with Him.

Accessories:  All were gifts

Here was the look without the jacket:

My sweetie called me his “little flight attendant” LOL!  i guess it does resemble that look.

Ya’ll it was so freggin’ cold!!!! I jumped back into that coat quick!!!

In closing how about this for a conversation starter…..Tell the person you’re talking to that they’ll be alive 100 years from now even 500 years from now then ask them if they know where they’ll be, heaven or hell because they are both for eternity.  I don’t know about you but I want to spend eternity with my Lord and Savior, Jesus Christ!!!


Before I go here is my fact for
Black History Month:
Sojourner Truth was born a slave but escaped to freedom in 1826 without her children. With the help from a lawyer she went to court in 1828 to recover her son who was illegally sold and was the first black woman to not only take a white man to court but win!!!

Be blessed this week lovelies!