First off, I have to apologize for my lack of posts the last couple of weeks.  Anyone in the school system can attest to how hectic the closing of school is.  I’ve been too busy tearing down my classroom and turning in things that I haven’t been able to update the blog.  But that shall soon end because my summer vacay starts tomorrow!!!!!


Over the weekend it STORMED but Saturday afternoon it slacked up just enough for the Jacksonville Food Truck Rally! My pin says I (HEART-JAX) Food Trucks!  CUTE right?!?  The rally was held in an effort to show how the food truck industry can be a positive force in  reclaiming and increasing pedestrian traffic in downtown Jax.  Attendees were asked to donate $1.00 as admissions that went towards Second Harvest of N. Fl, a mission that donates food and groceries in an effort to fight hunger. 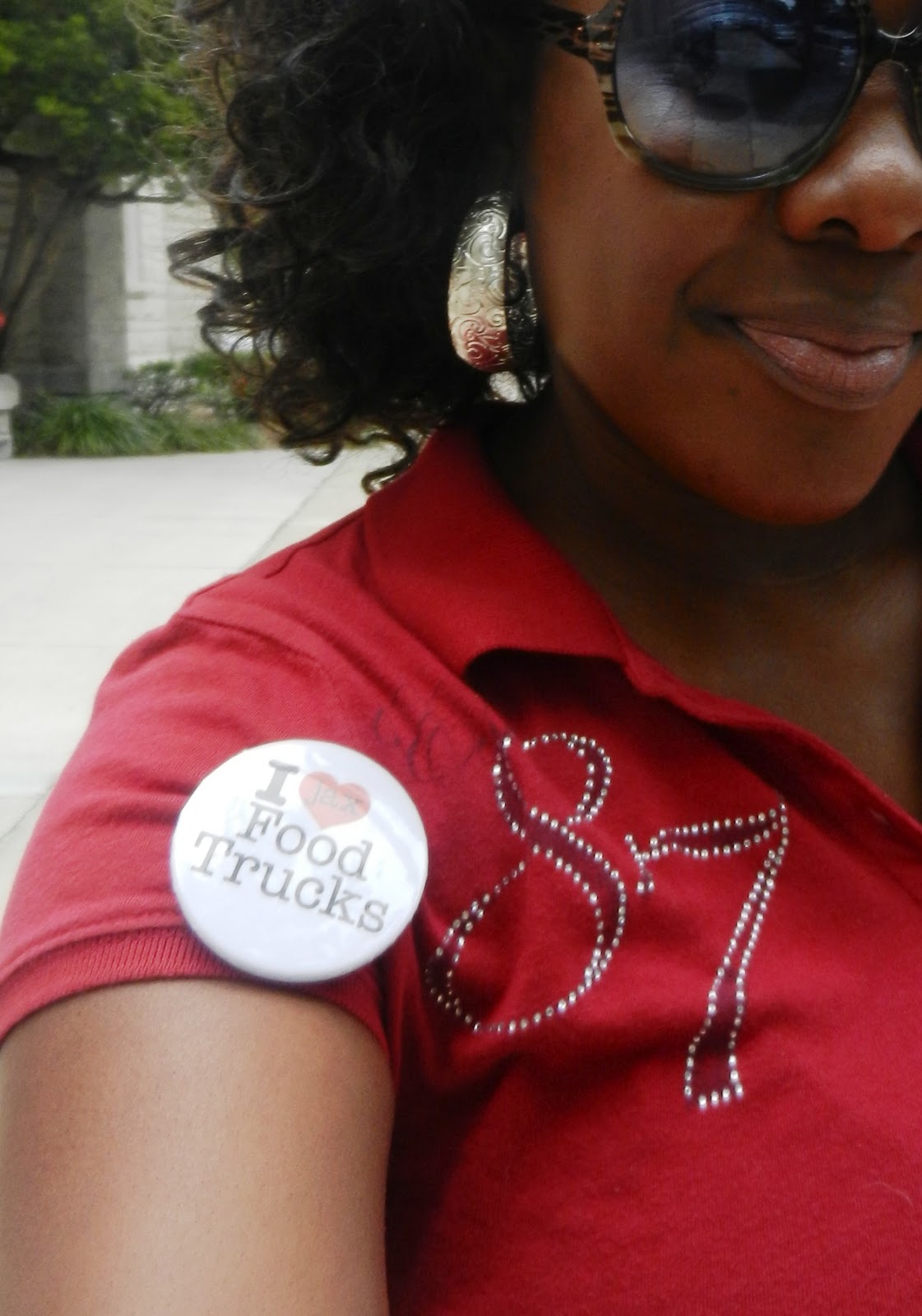 When I heard about the event I knew I had to attend!!!  The food truck industry is just now starting to come around in my city so there were only about 9-10 trucks there. ( I don’t know if that’s a big or small number for a city) 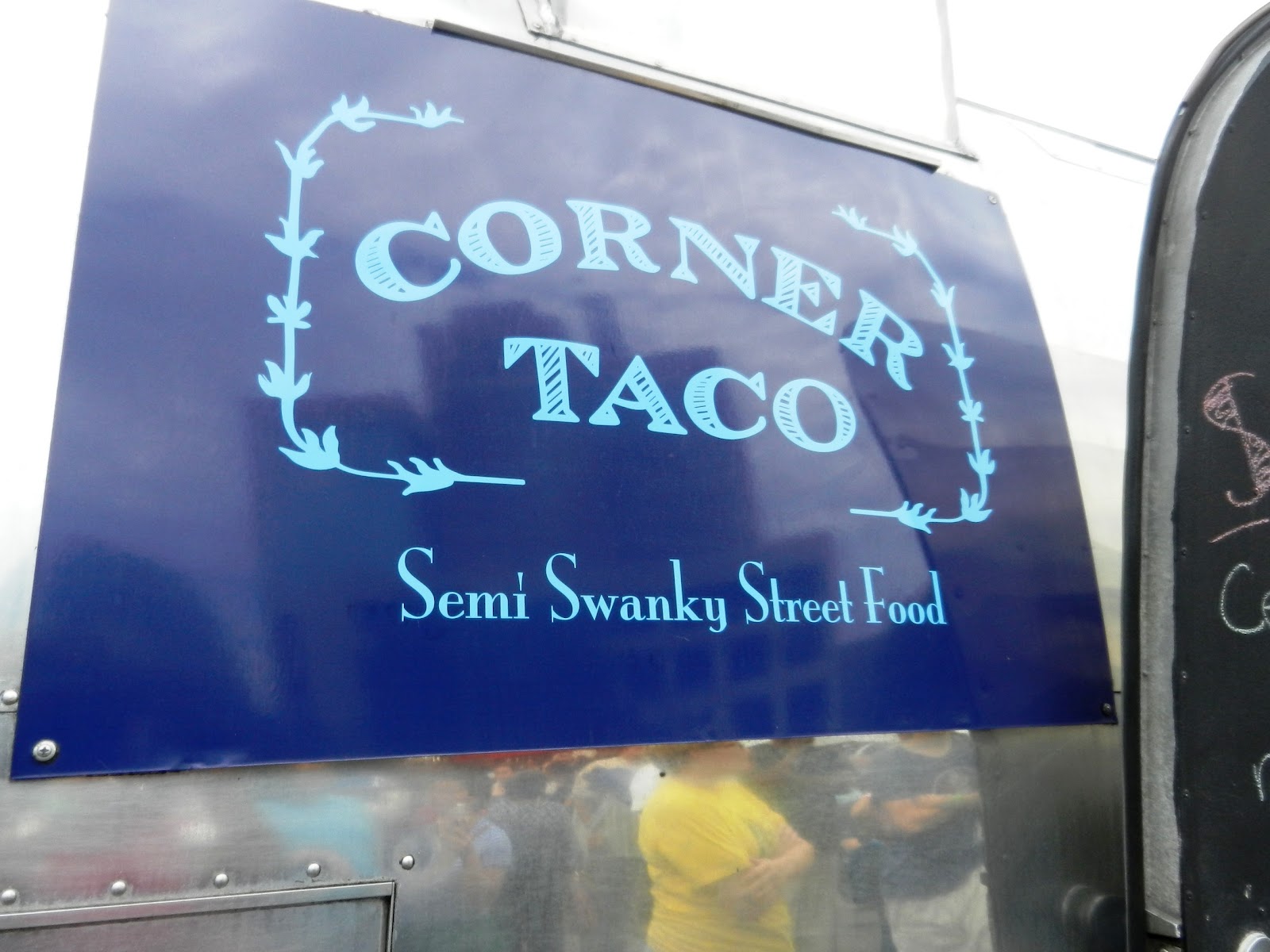 My first stop was at the Corner Taco! 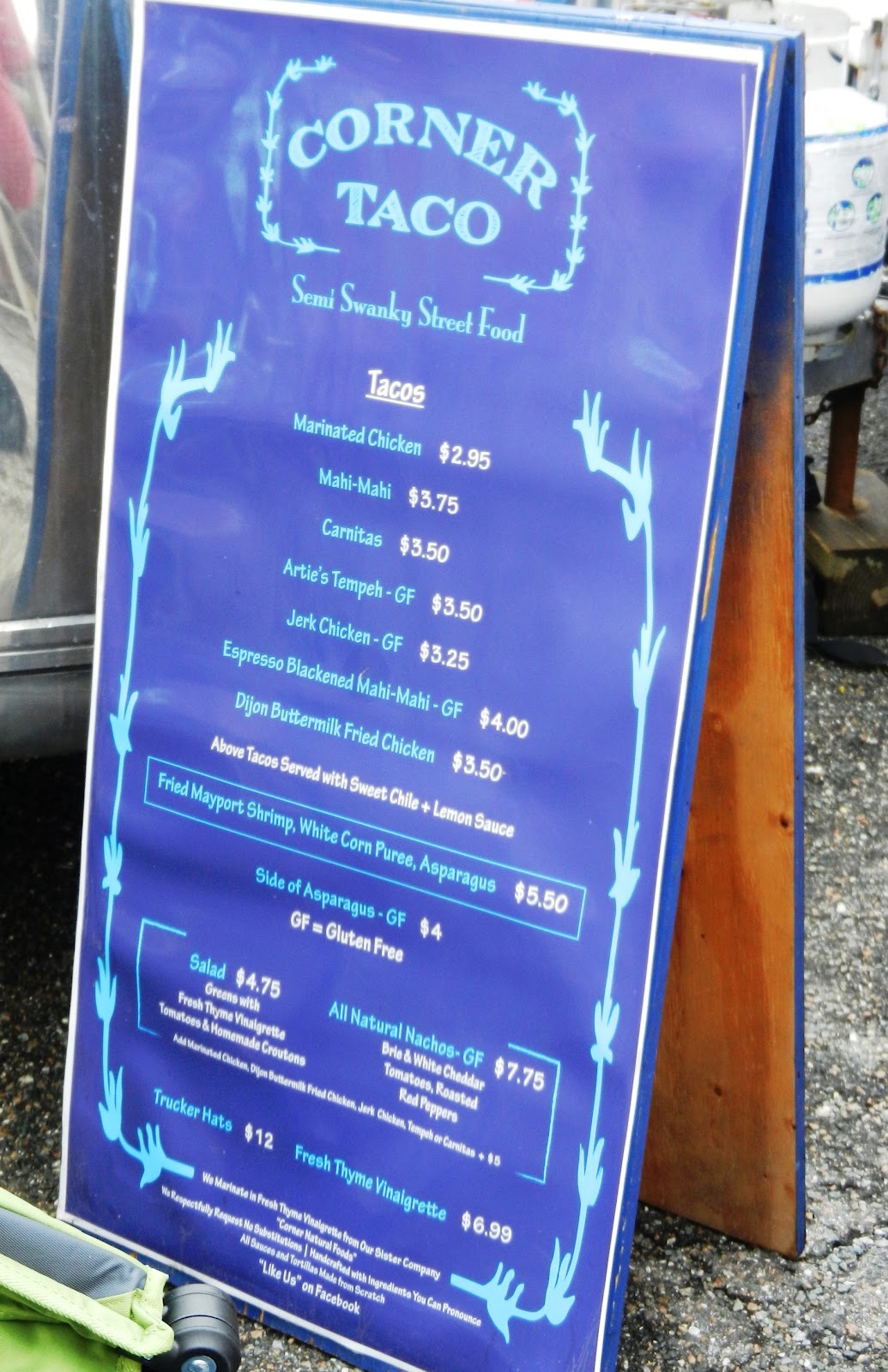 I have read a few reviews on this truck known for having “Semi-Swanky Street Food”! 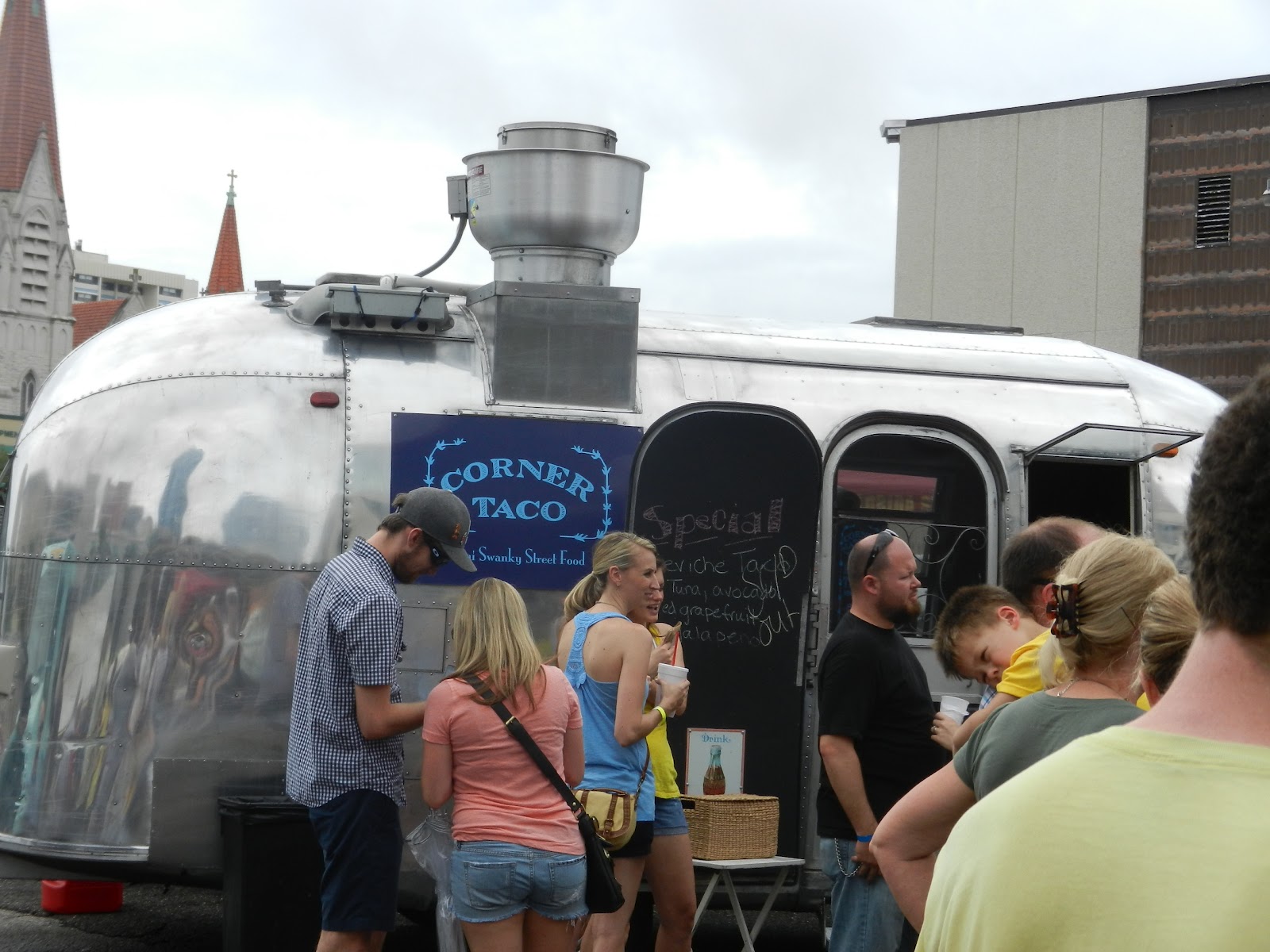 The fact that they were the smallest truck with the longest line, told me that they had to be worth the wait! 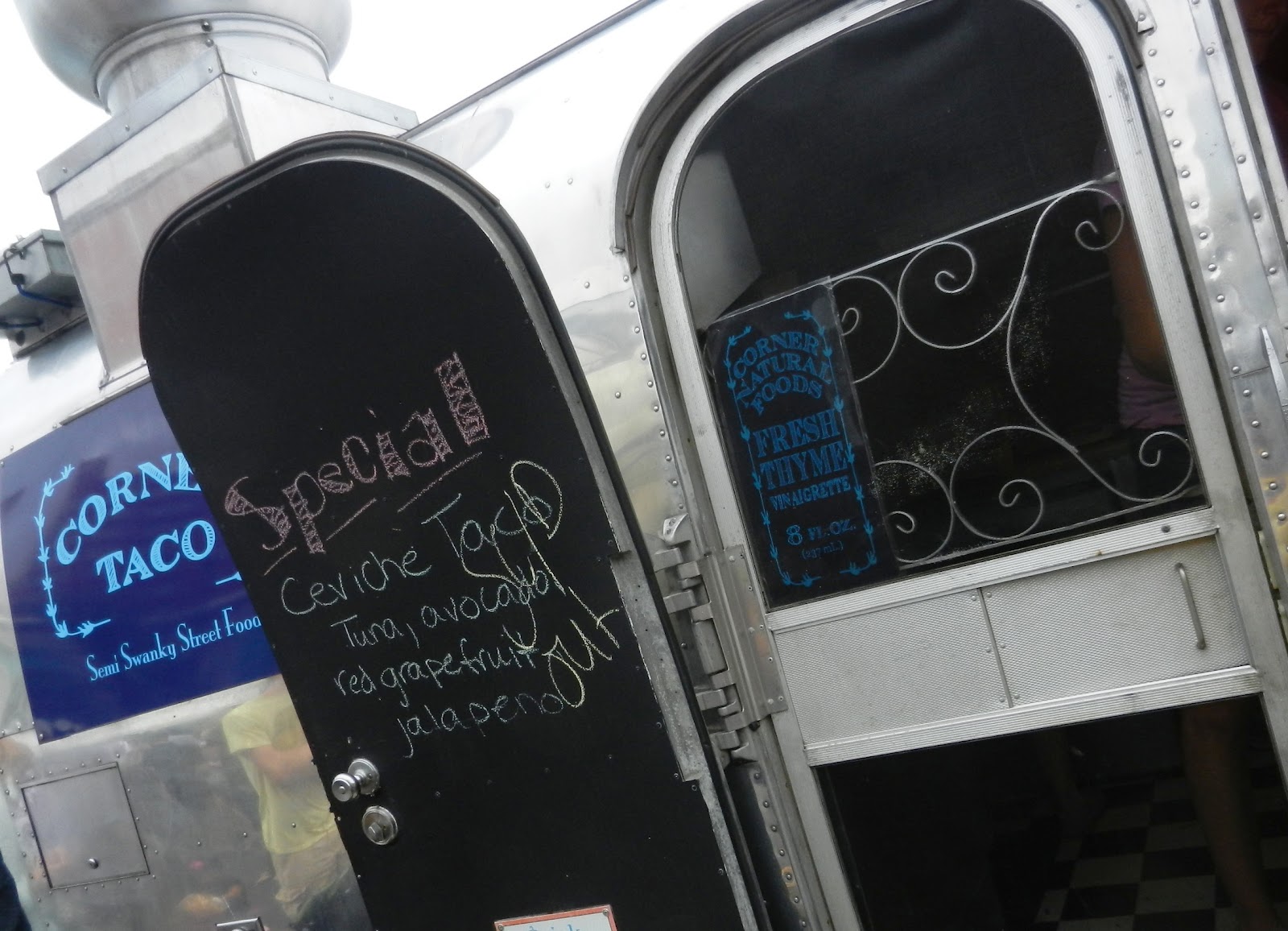 My goal today was to try foods that I never have or normally wouldn’t and the Ceviche Taco special was on that list until I saw “Sold Out”.  The only bad thing I can say about the event is that the food sold out quick. 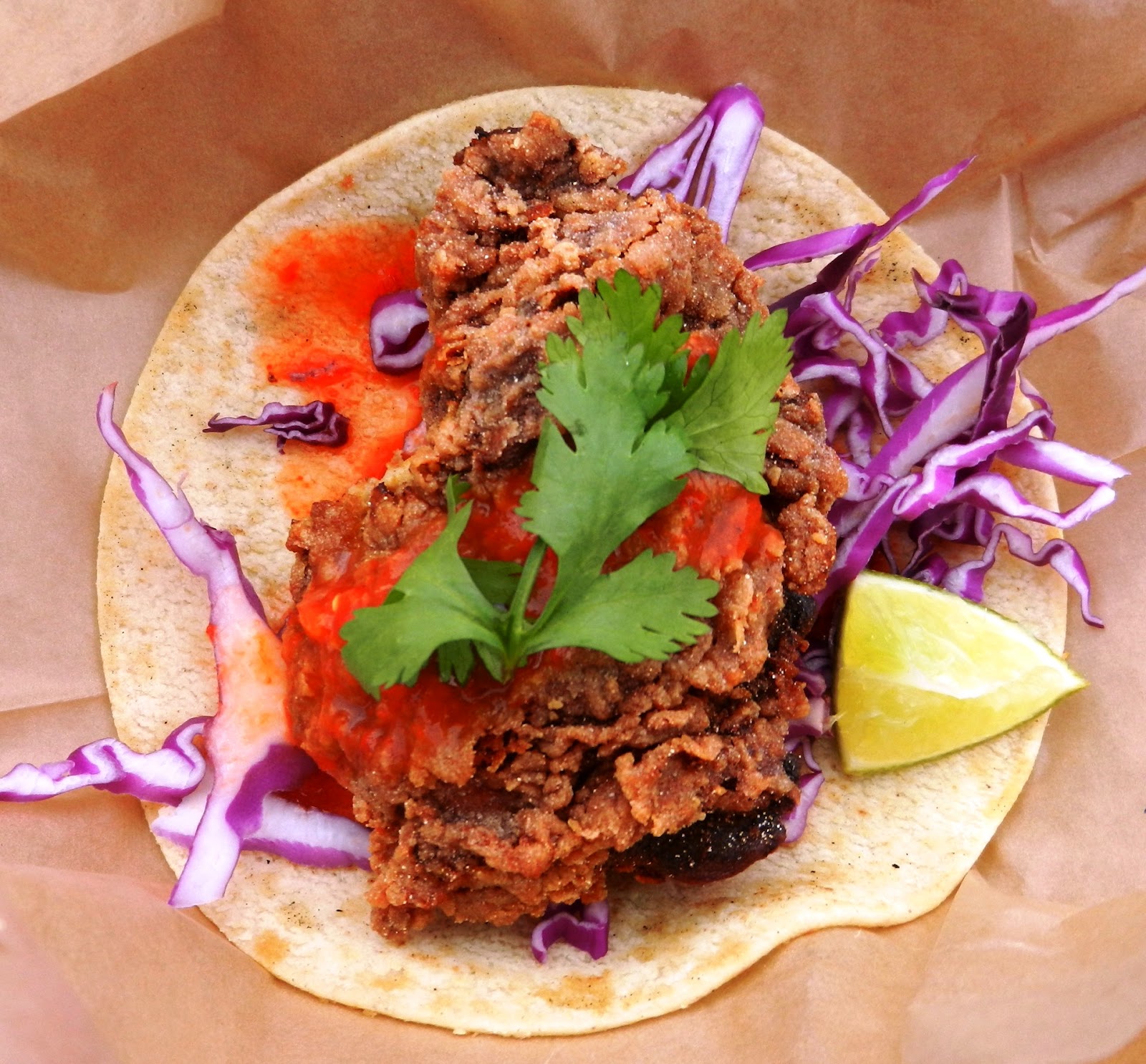 Quite alright because I got the Dijon Buttermilk Fried Chicken taco and it was delicious!!! It was the perfect crispiness and the flavor was just amazing.  I really liked the chili sauce on top as well.  YUM YUM! 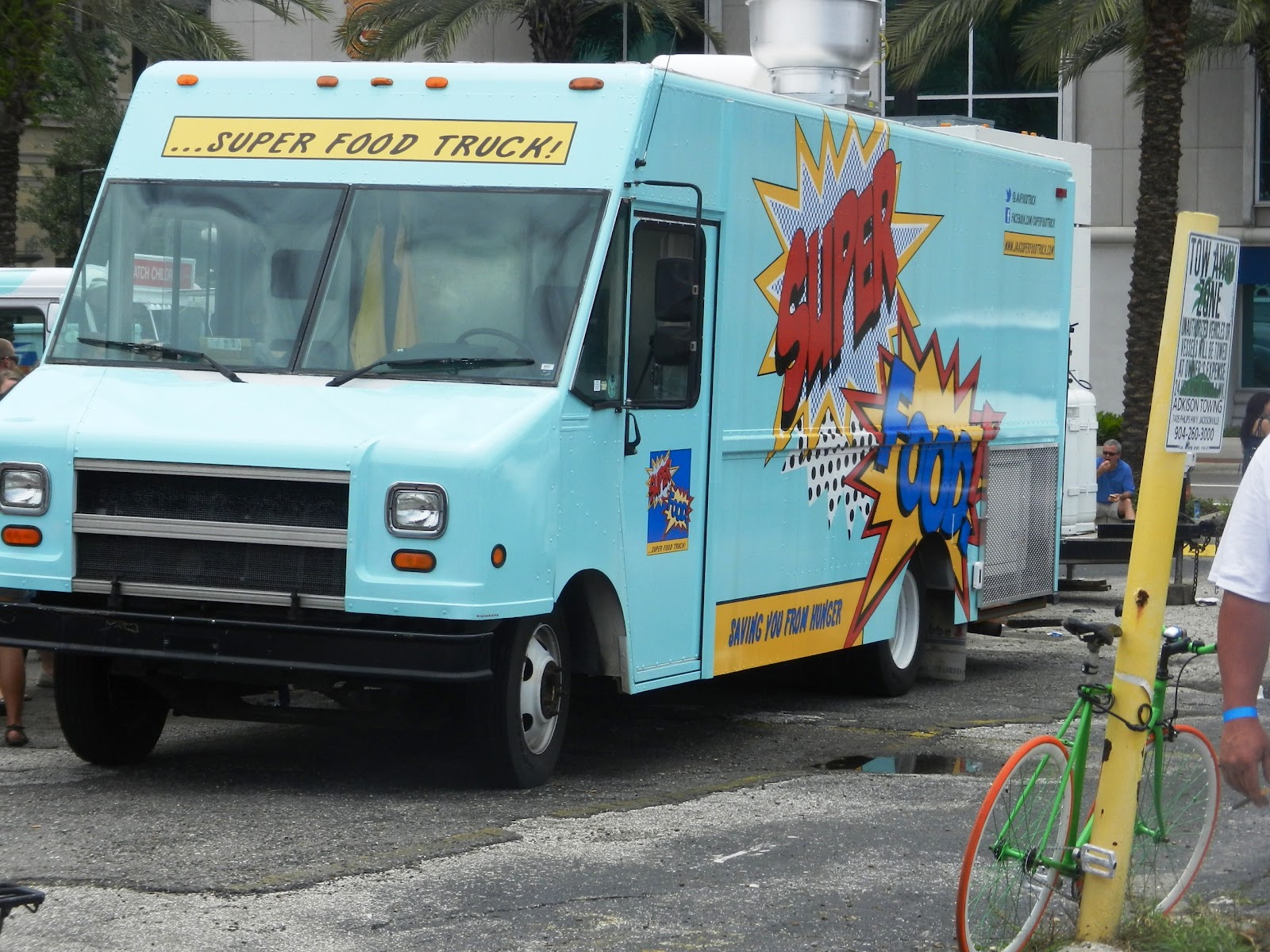 The girls behind me in the our long wait for Corner Taco, had the tuna poke Nachos from the Super Food Truck! 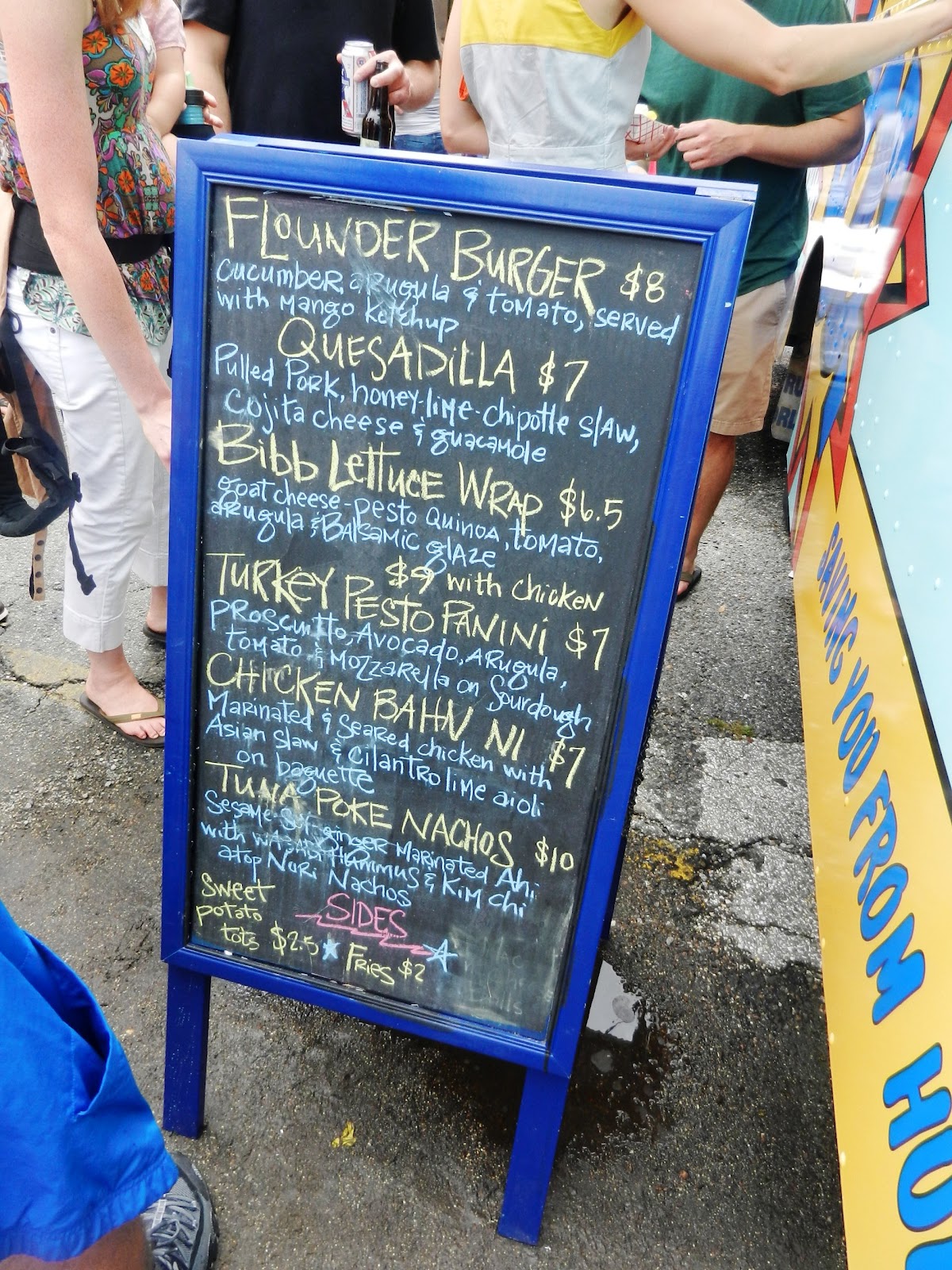 This isn’t the first thing your think of when you hear the word nachos is it? Well these nachos were made with Sesame-seed ginger marinated Ahi Tuna with wasabi hummus, and Kim Chi & Nori. 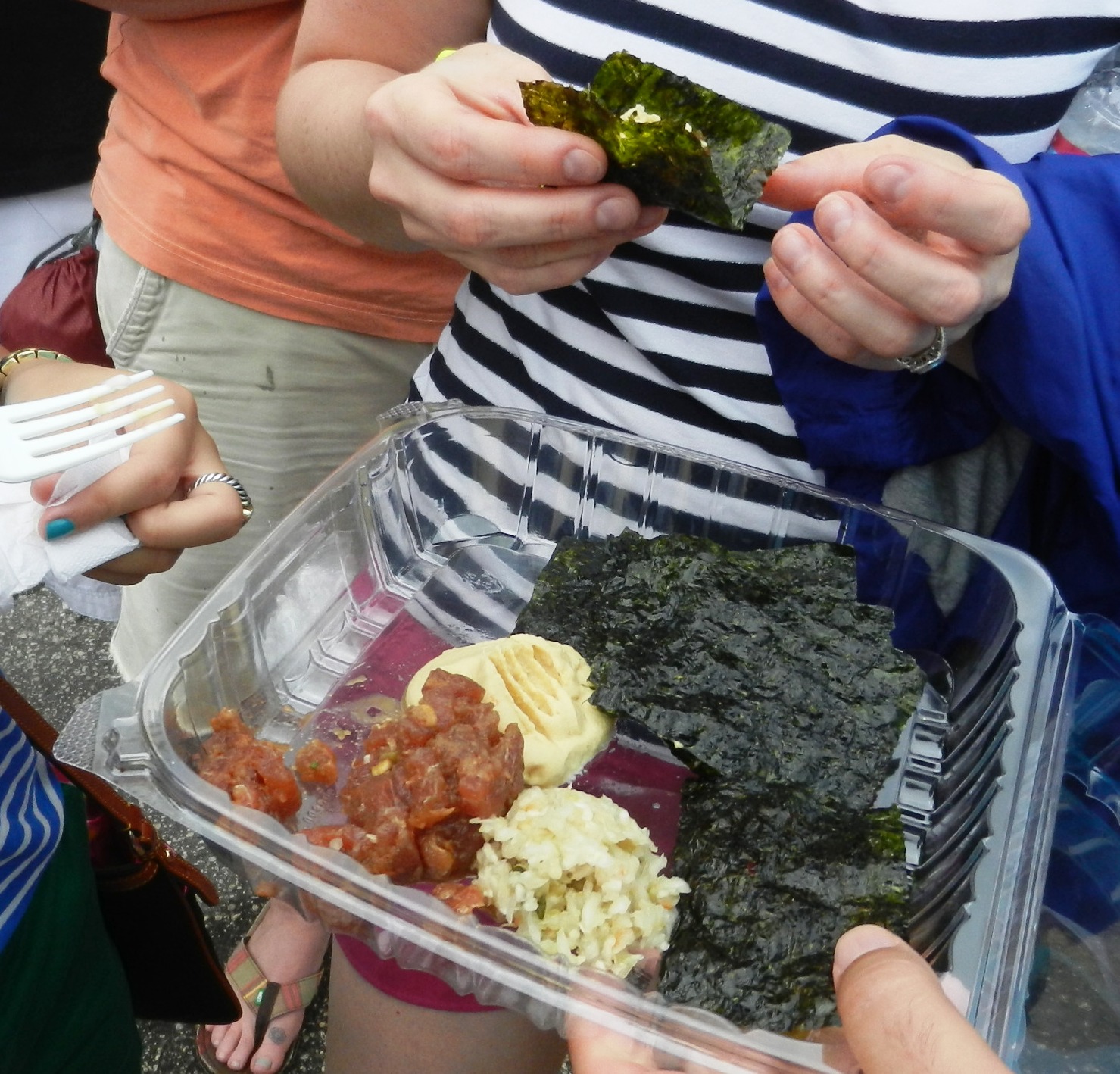 The girls said they were “actually delicious!”  I took their word for it!

My next stop was Monroe’s BBQ on the GO! 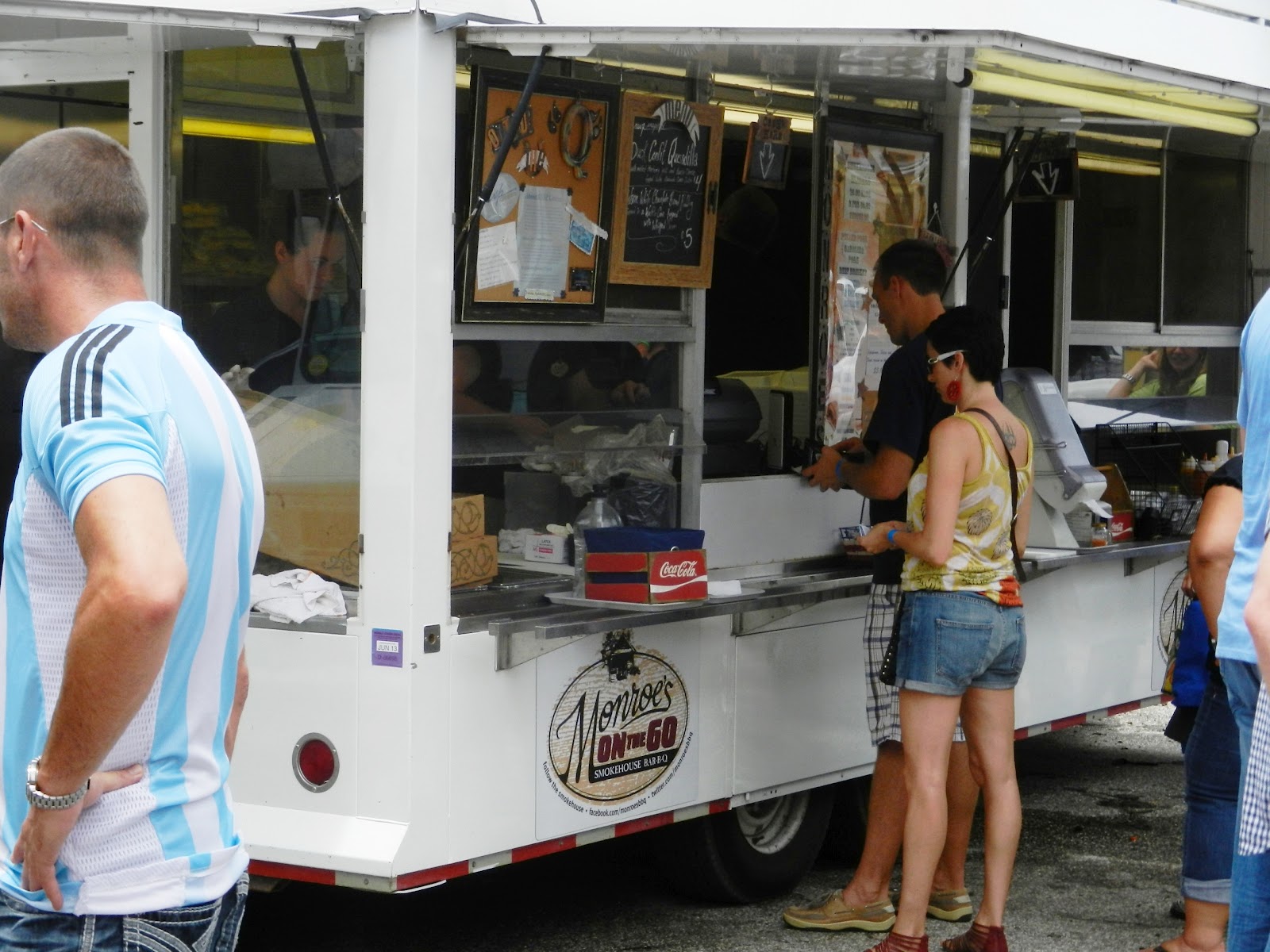 I had to get my hands on this…. 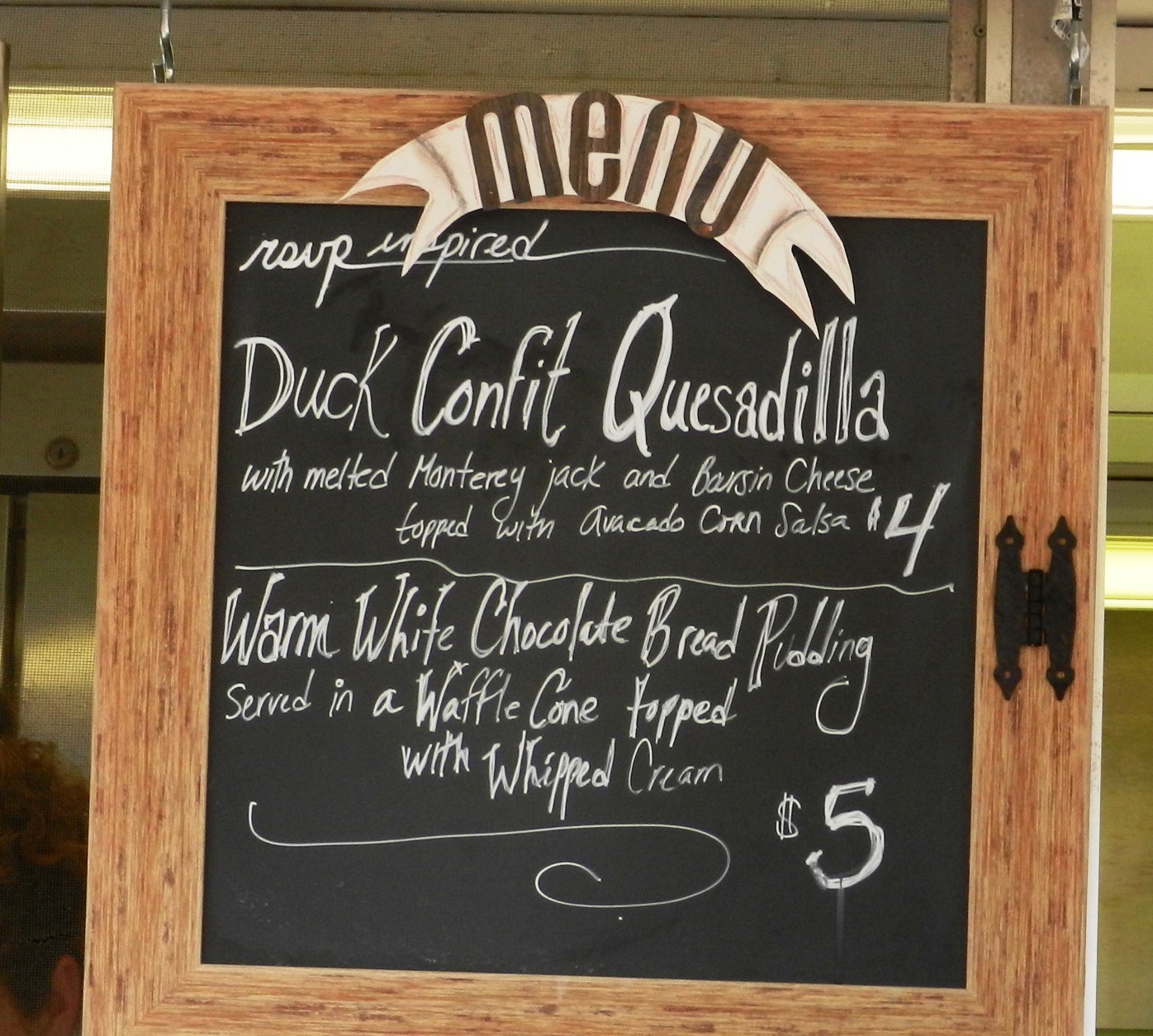 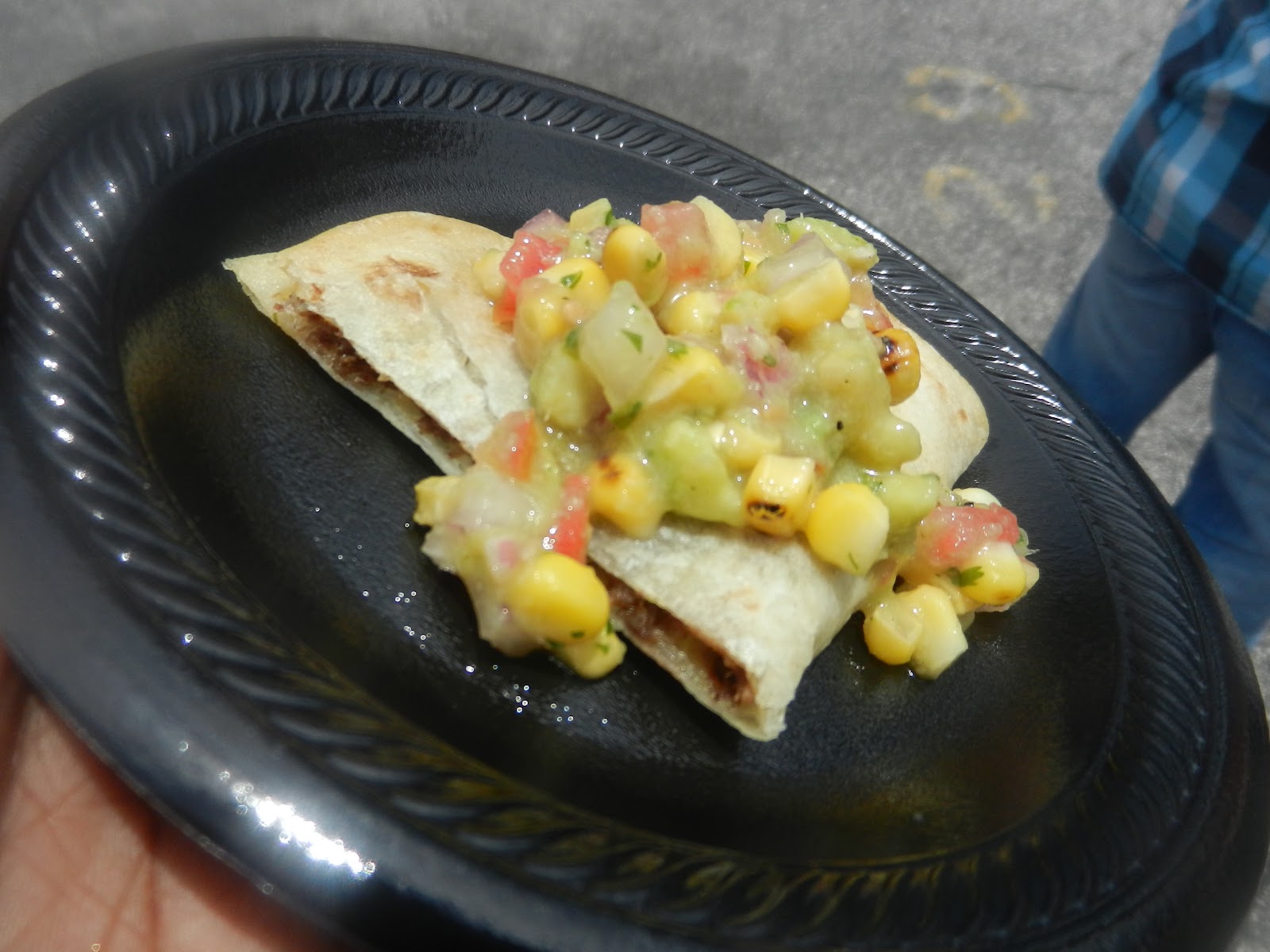 It was absolutely delicious!  For those who are wondering what duck confit is, it is made from the leg of the duck.  The meat is then cured, then poached in its own fat.  That may not sound the greatest but it tastes great! 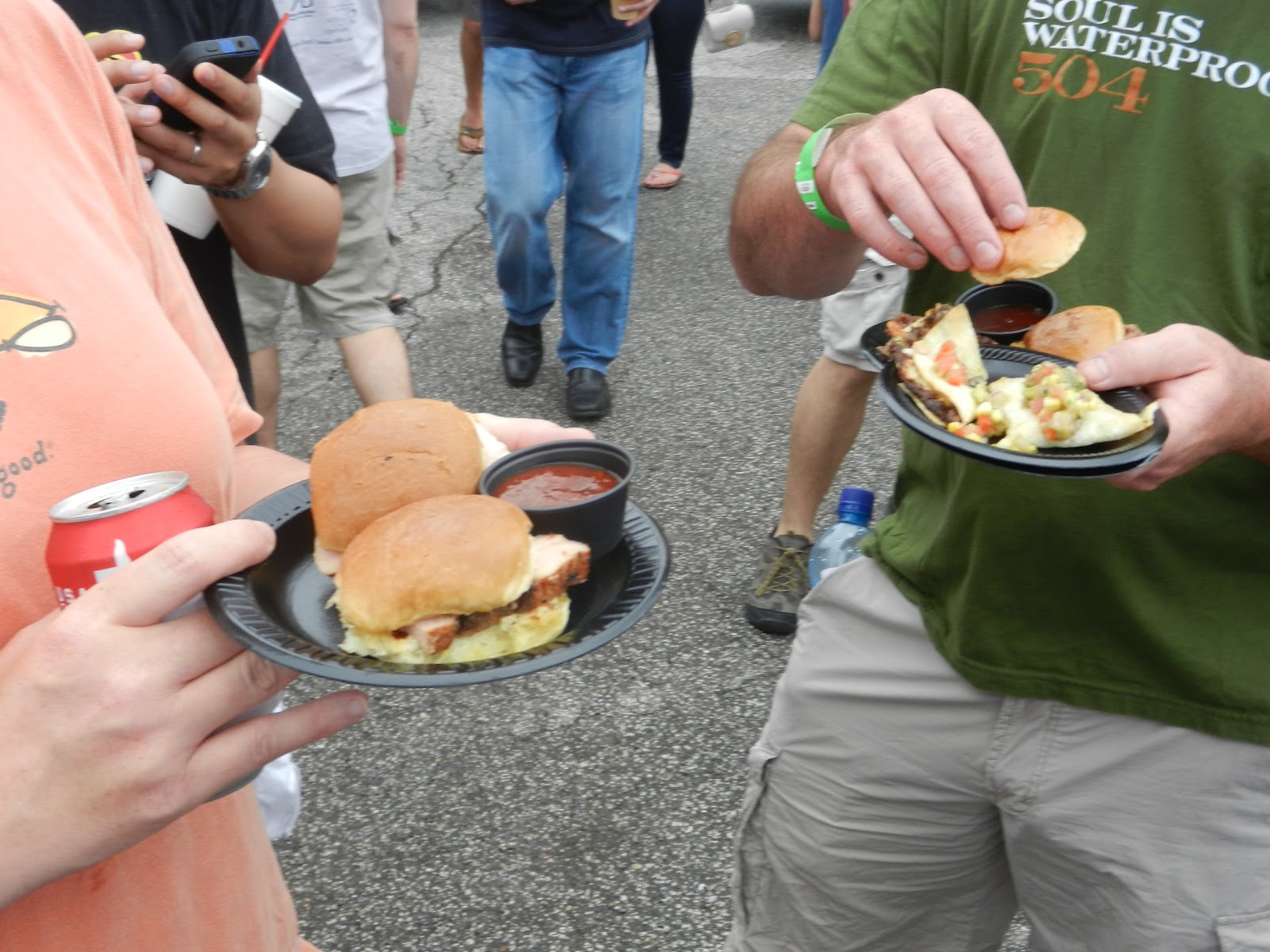 These quesadillas were selling quite a bit, along with the BBQ sliders at Monroe’s! 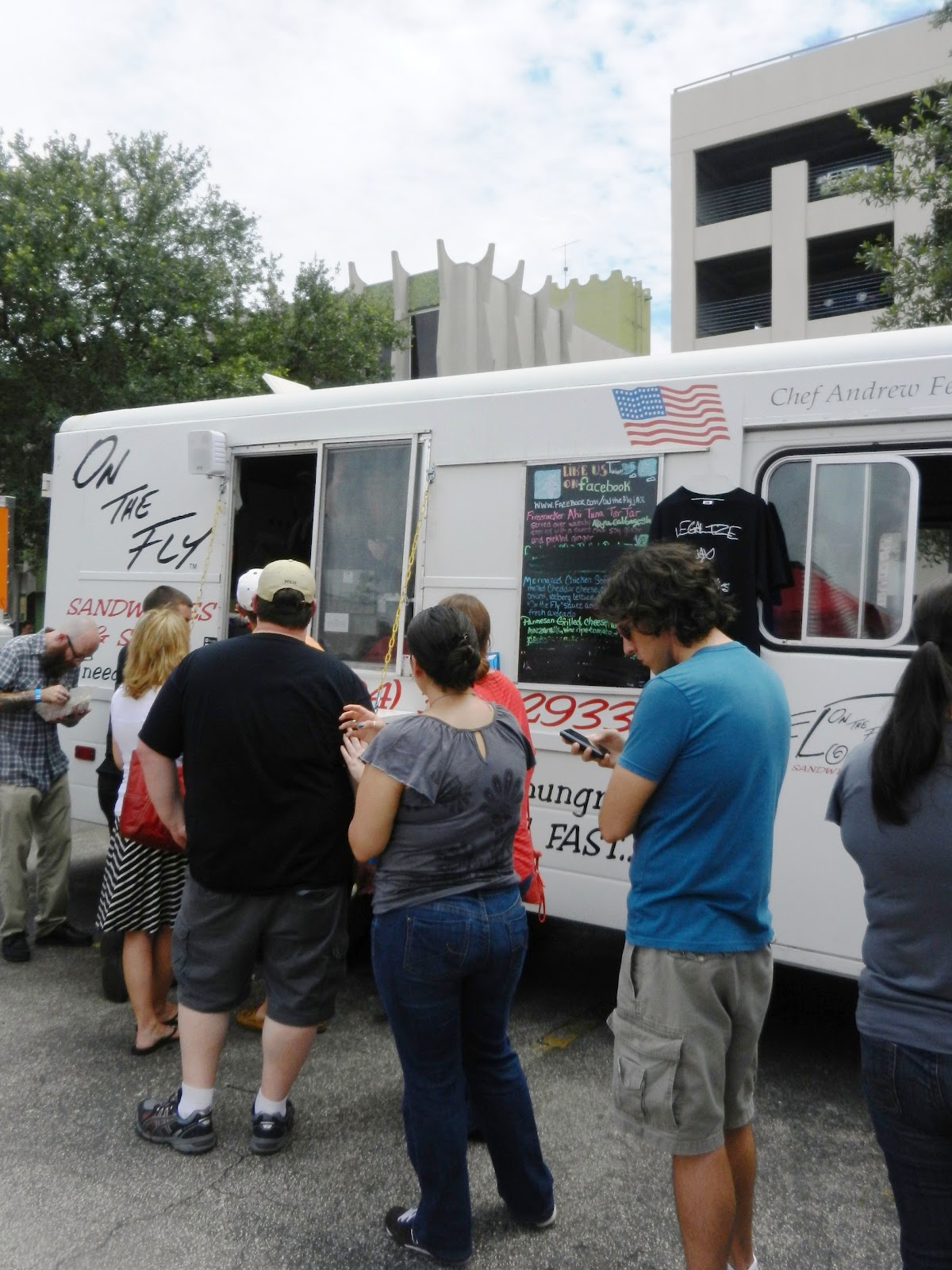 Next and final stop was “On the Fly”! 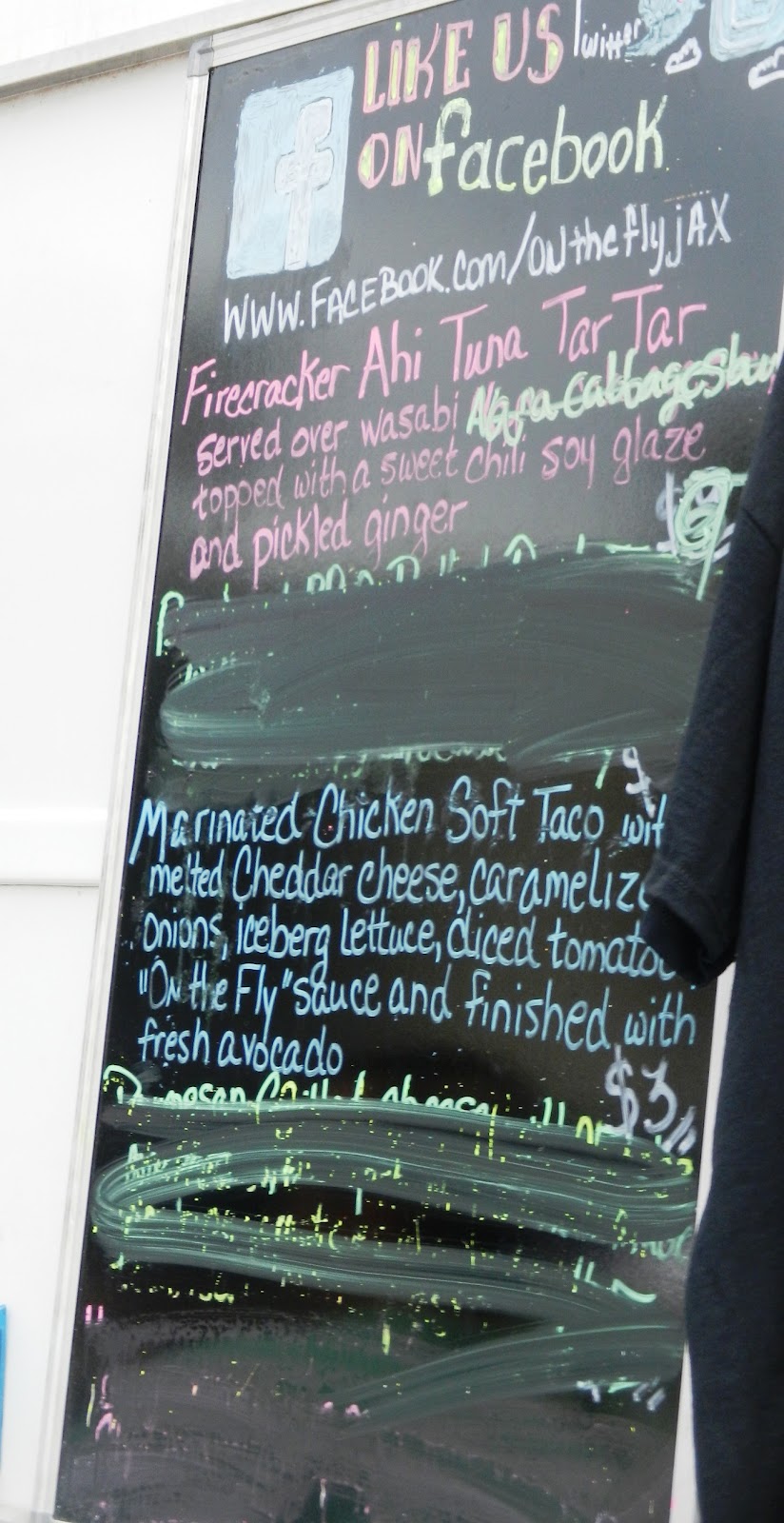 By the time I got here, food was selling out quickly.  There were so many people that the wait at each truck was an hour at the least.  All that was left at On the Fly was the Marinated Chicken Soft Tacos and  Firecracker Ahi Tuna Tar Tar. 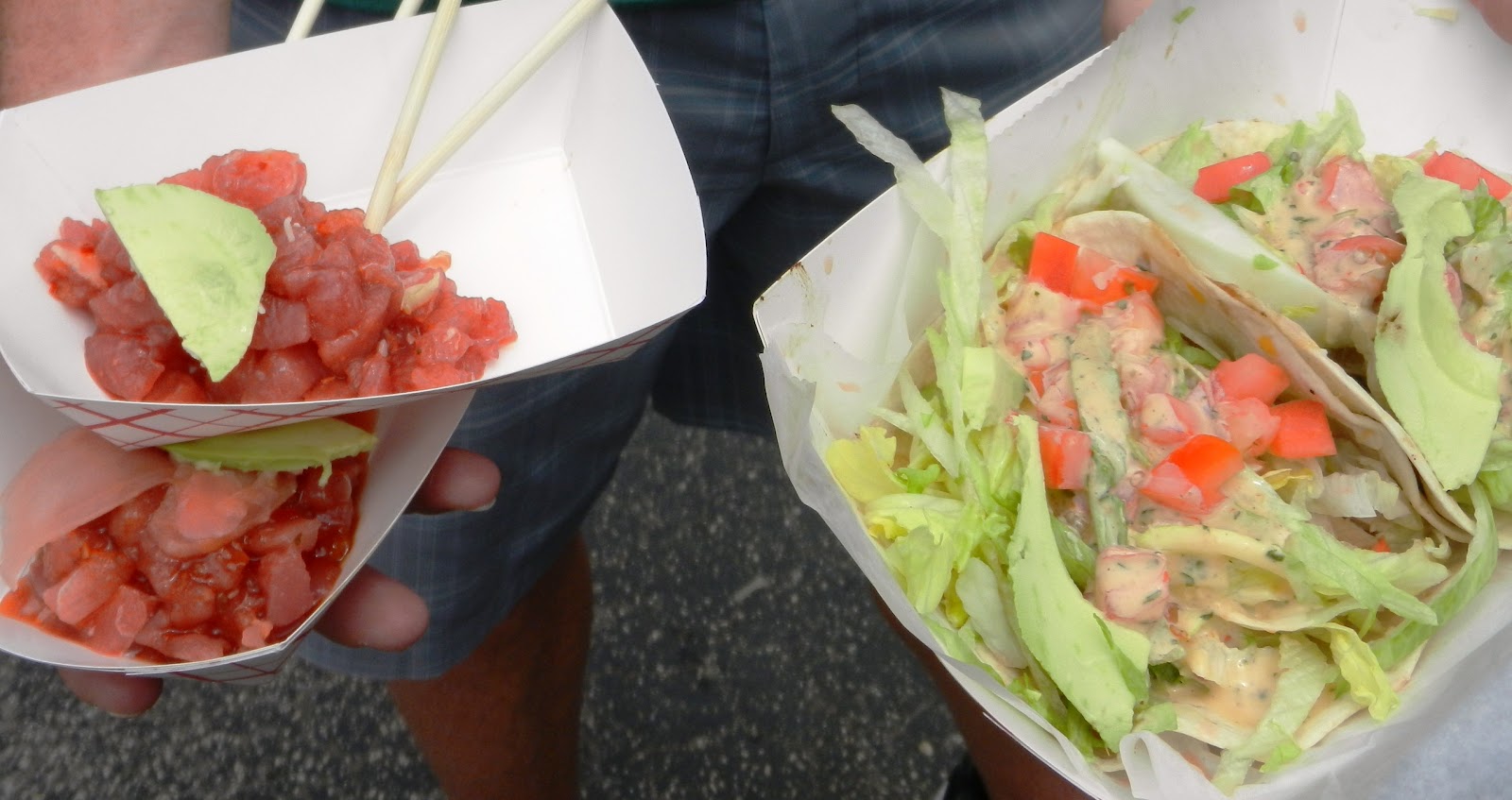 I’m not ready for anything tar-tar (raw) so I went for the chicken taco and took a picture of the guy in front of me tuna tar tar.  The chicken taco had an amazing flavor!  It came with caramelized onions, lettuce, tomatoes, and some special sauce! YUM!!!

Here are the other trucks I didn’t get to go to.  I will try to keep up with them over the summer and try the foods they have to offer. 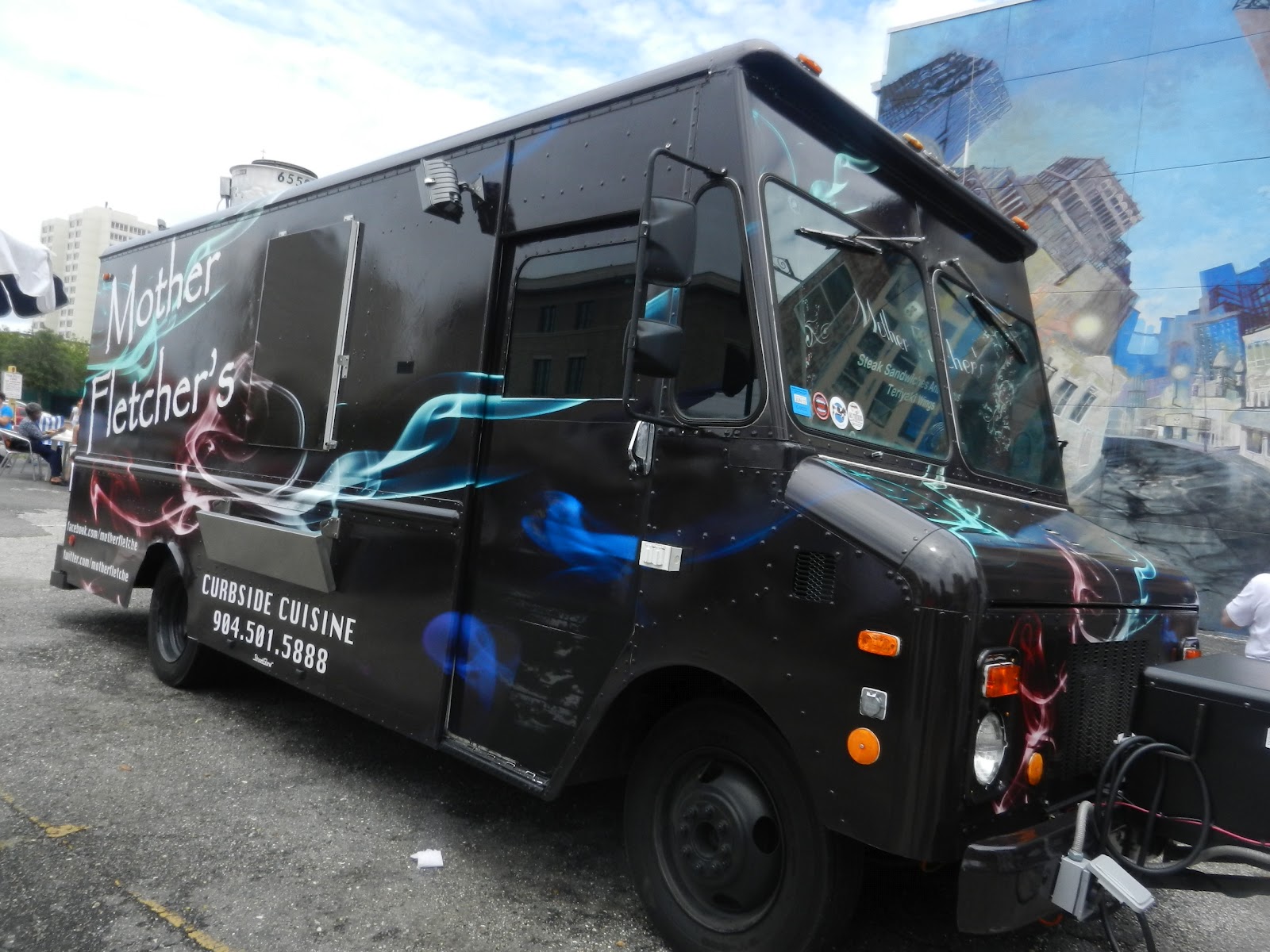 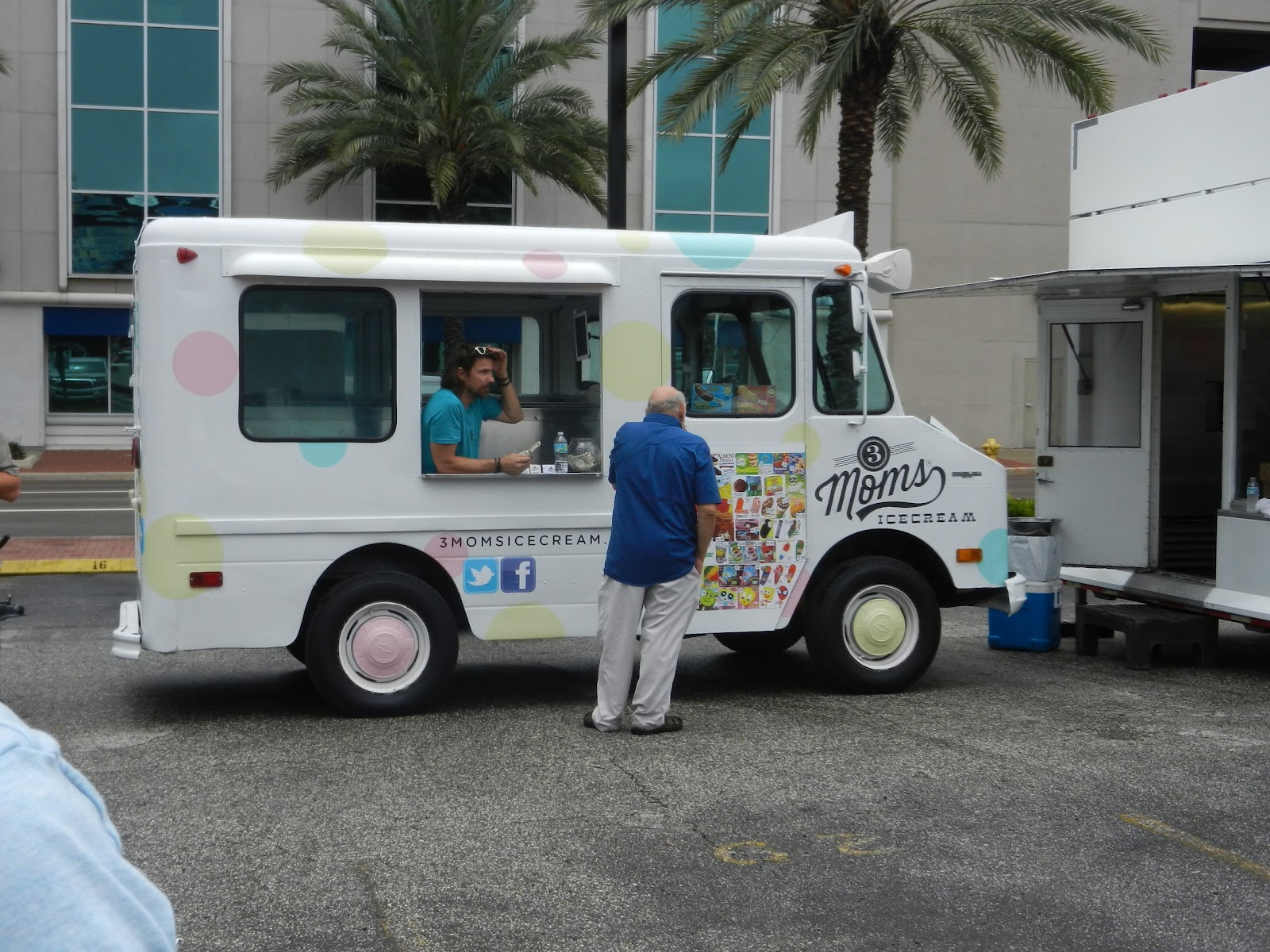 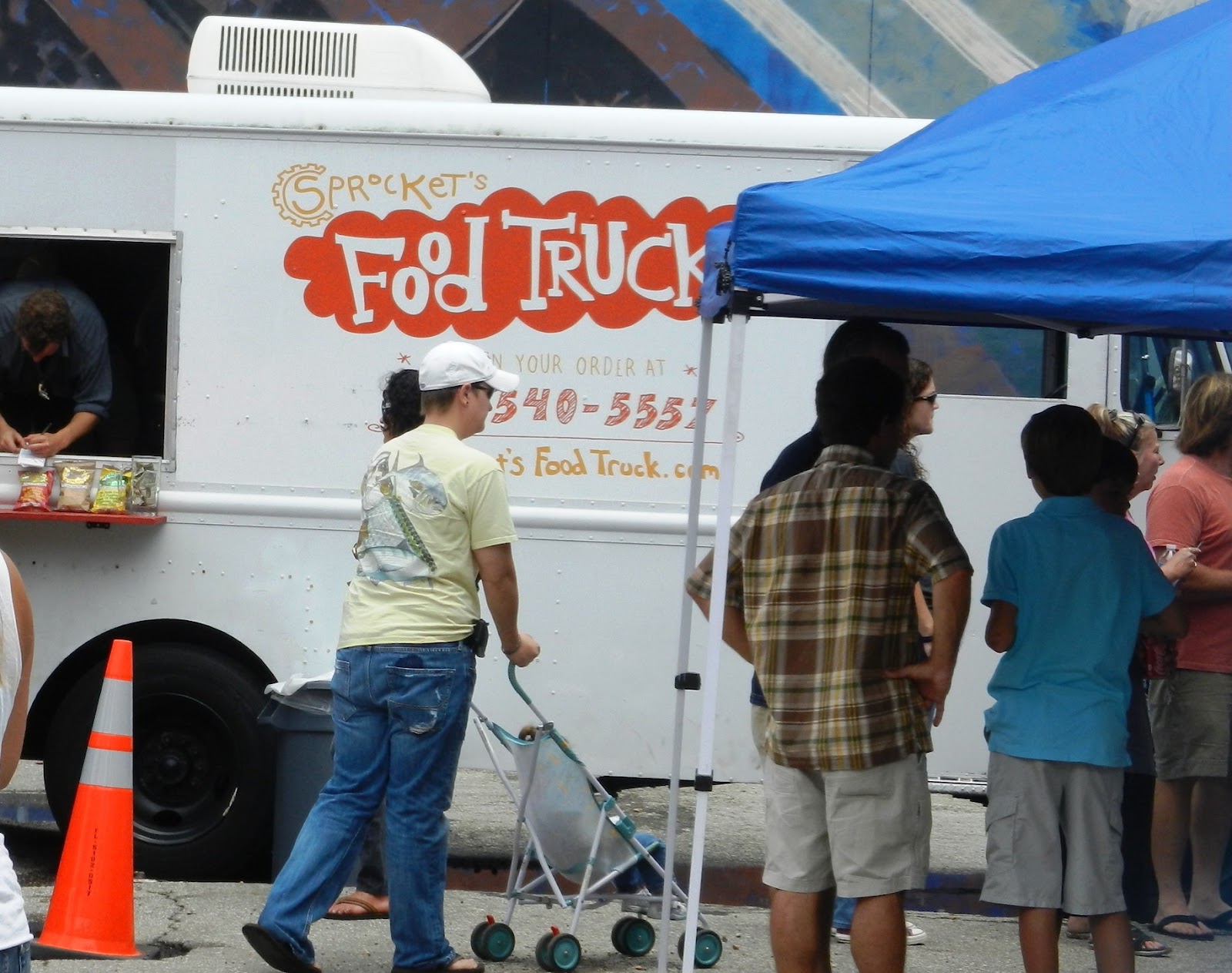 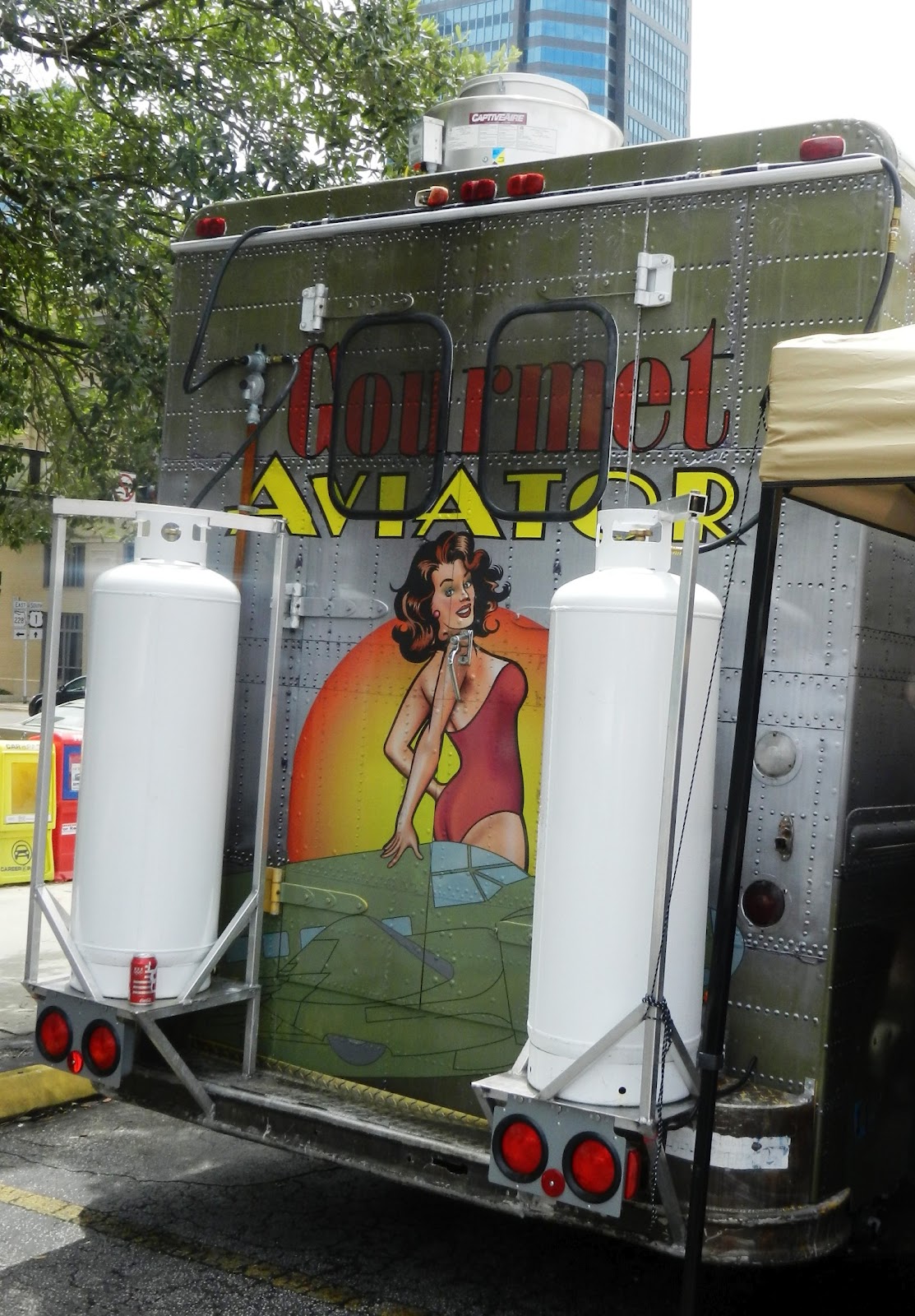 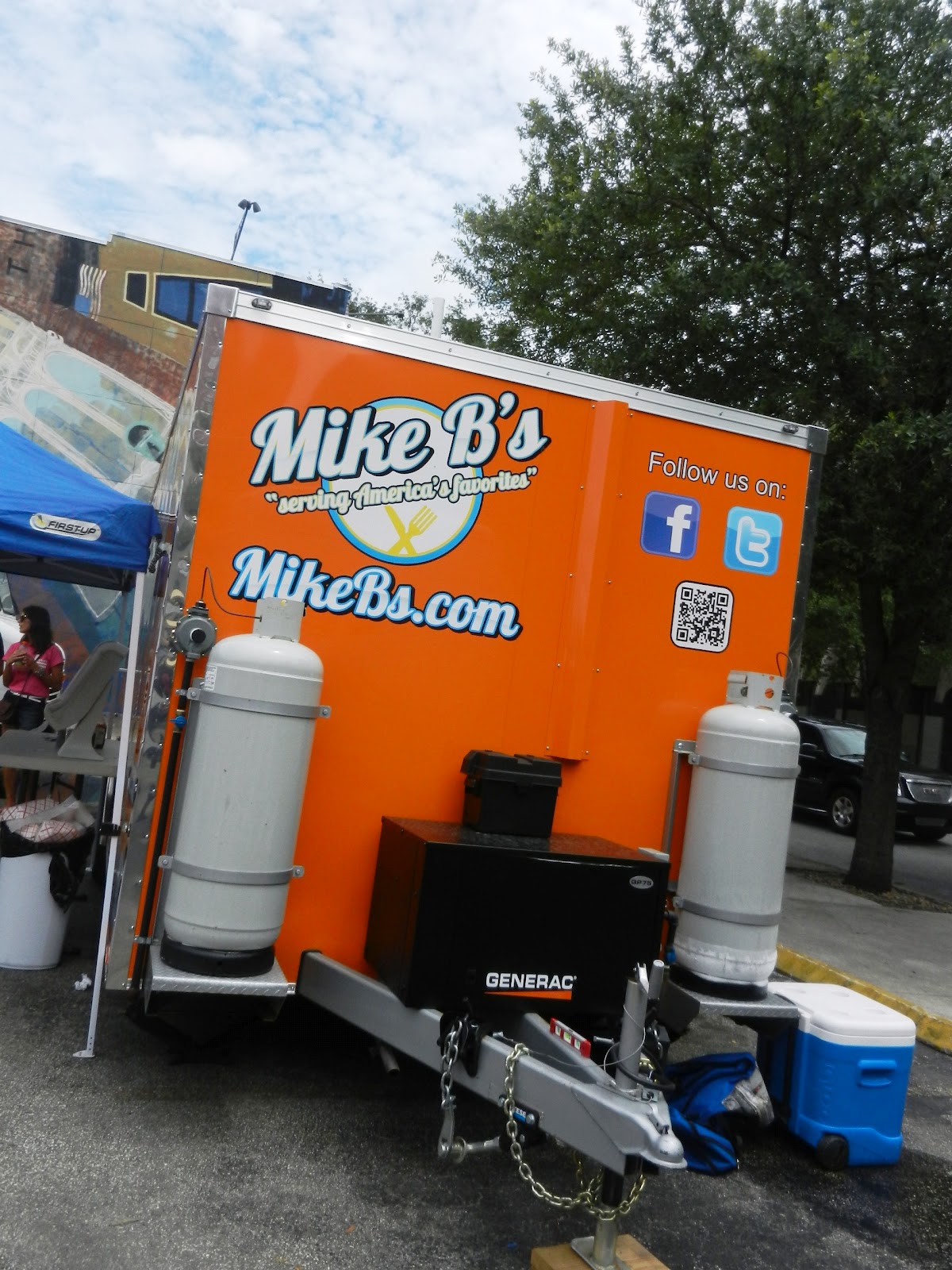 I had a great time!  I think food trucks are amazing.  You get a great variety of gourmet and comfort food at super low prices.  I look forward to seeing what more they have to offer and if they will indeed help make a positive impact on the re-growth of the downtown culture.

I’ll be back soon!  Have a great day!