There is something so magical about being in the presence of archaeological sites and remains.  It’s like stepping into an old history book and using your imagination to see and feel what actually happened during ancient times.  Throughout my recent trip to Italy and Greece I was consistently in amazement at how massive some these structures were and bewildered at how they’re still standing after thousands of years.  On my last day in Greece, we went to the Acropolis in Athens. 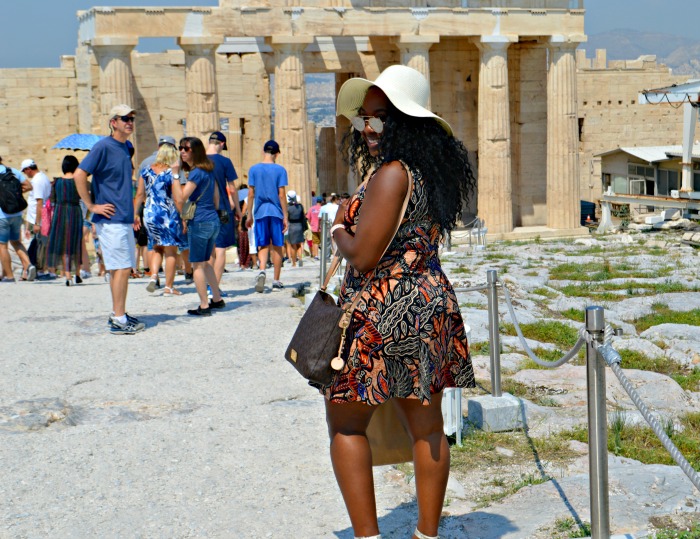 The“High City” can be seen from several locations through out the city of Athens and because it’s so high up, you can imagine the hike it took to get to the top.  Though this day was particularly scorching, the hike was well worth it! 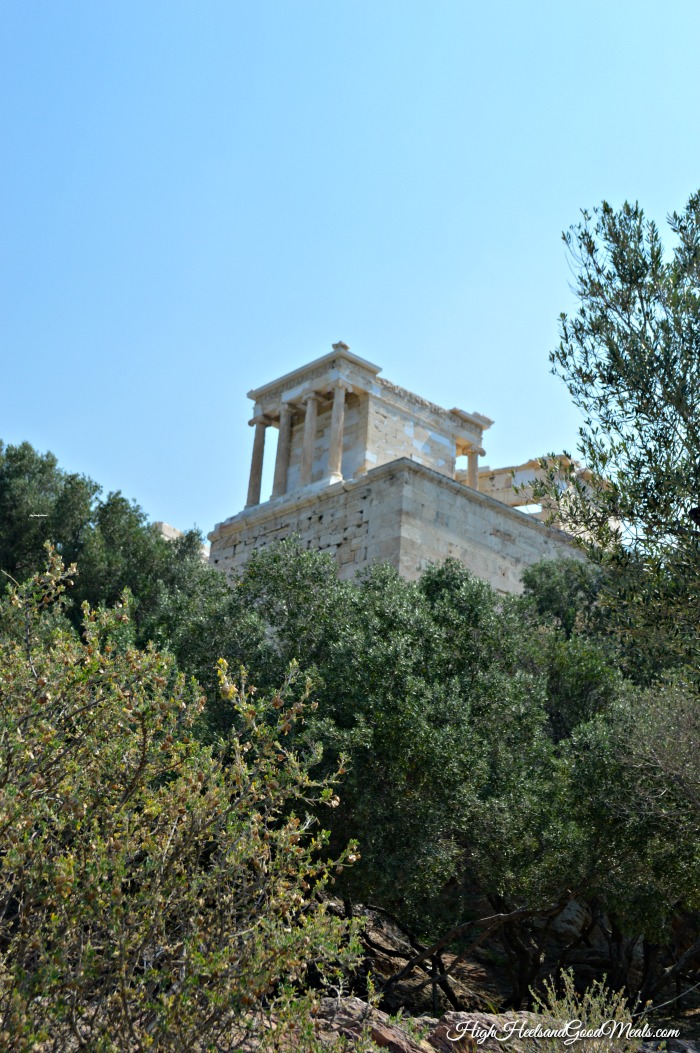 Before making our way up, the fashionista in me had to stop for pictures near the olive trees! 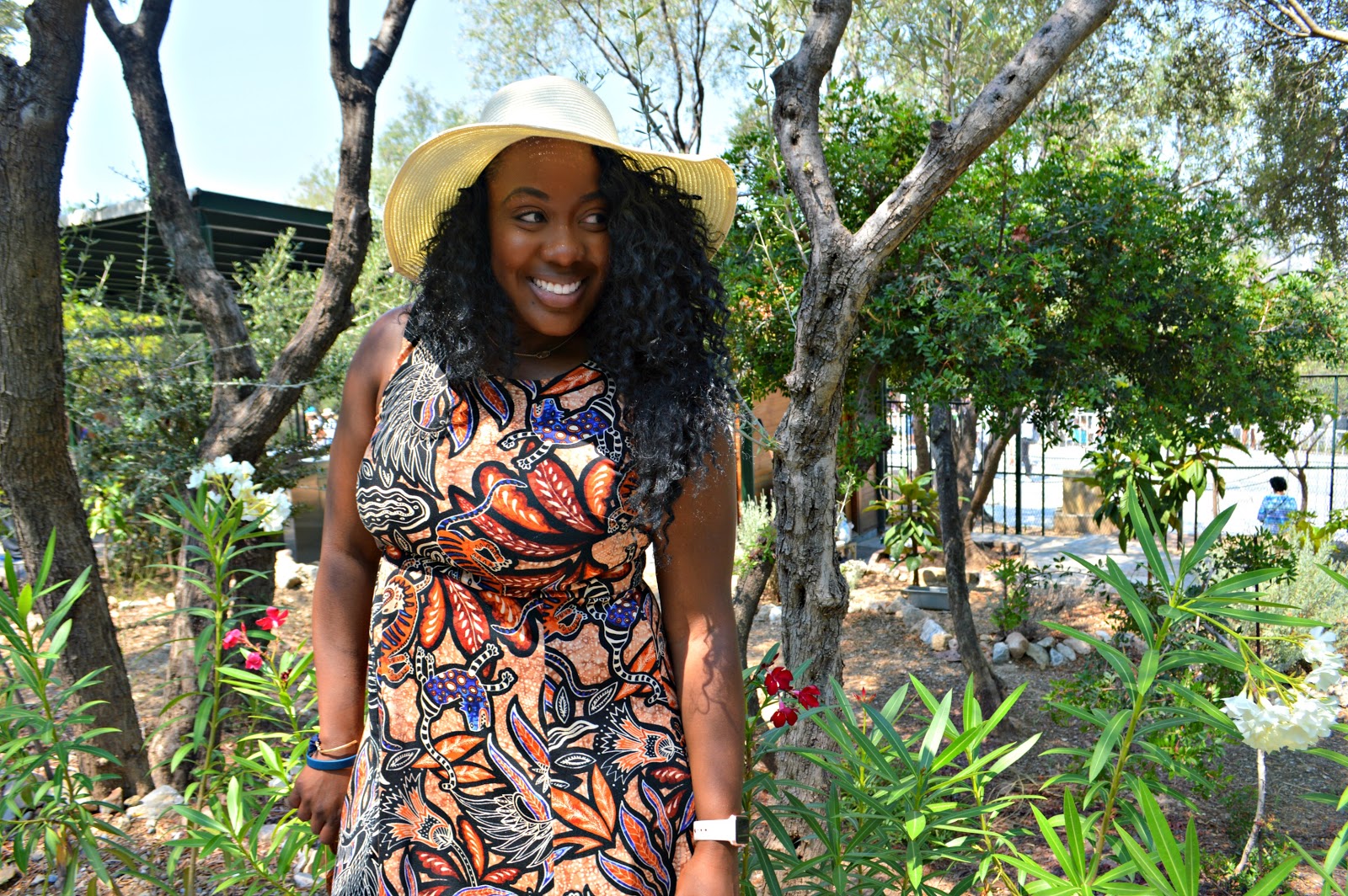 I bought this super cute sun hat before the trip and I was so thankful for my hat that day because the sun was literally beating down on us! 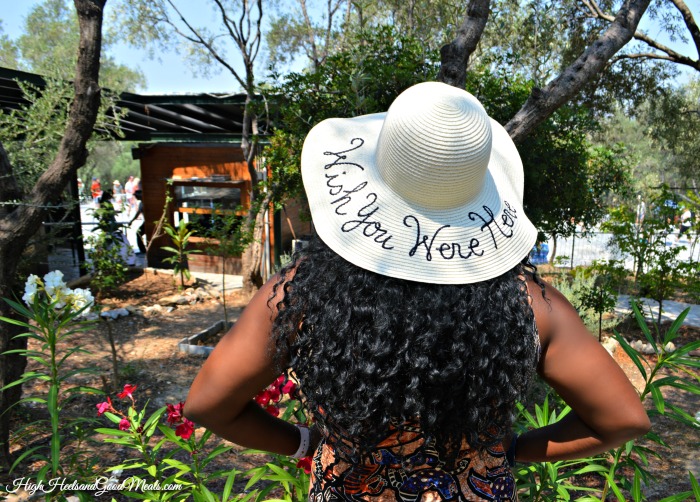 Thank God for the trees because they offered up a little shade as well! 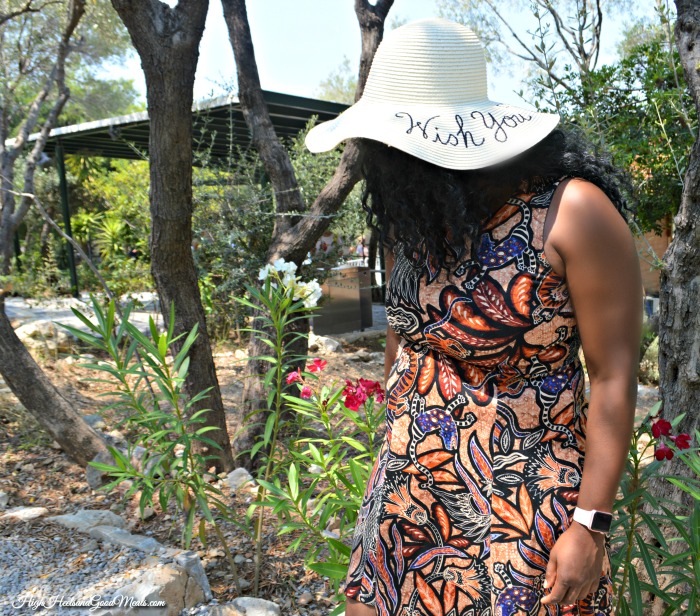 So what kind of teacher would I be if I didn’t share a little history about Acropolis with you!?!?   Most of us are familiar with Greek mythology and the city of Athens is named after the Greek goddess, Athena who was the goddess of wisdom, courage, and civilization.  Acropolis was built in honor of her. 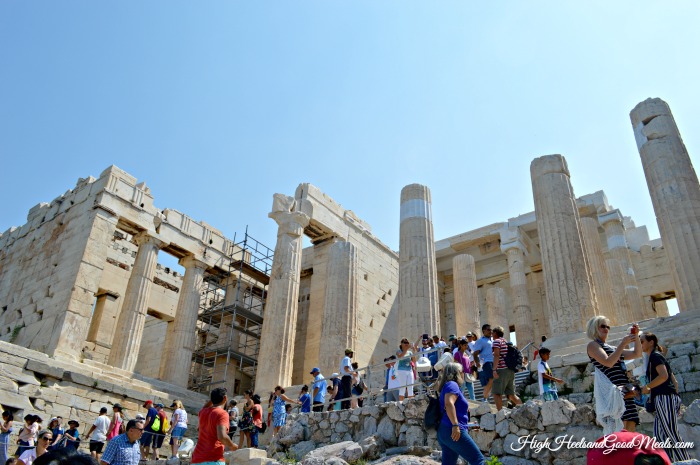 This is Propylaea, the entrance to the temple of Athena Nike.  This is the earliest temple built on Acropolis.  Walking up the Propylaea was extremely tricky because the ground still has original marble and it was very slippery. 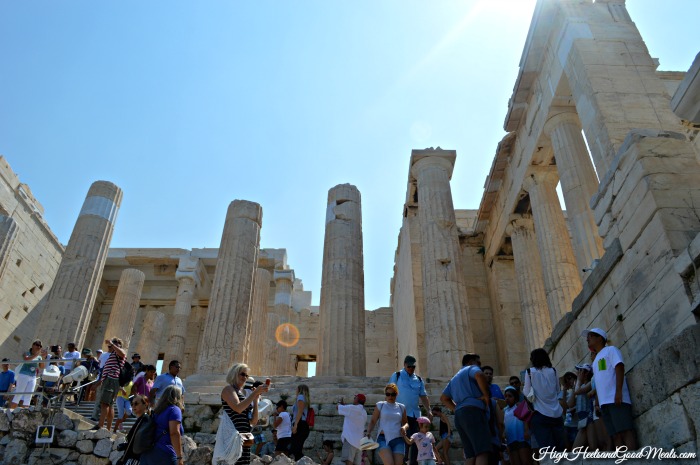 Of course the Parthenon is the quintessential Greek monument that most would think of when they think of Acropolis.  I have to admit, by the time I made it to the Parthenon, I was literally burning up so I snapped a picture and made my way back down the hill.  However, from what I did see, it was beautifully constructed with marble.  I can only imagine what it looked like in its prime. 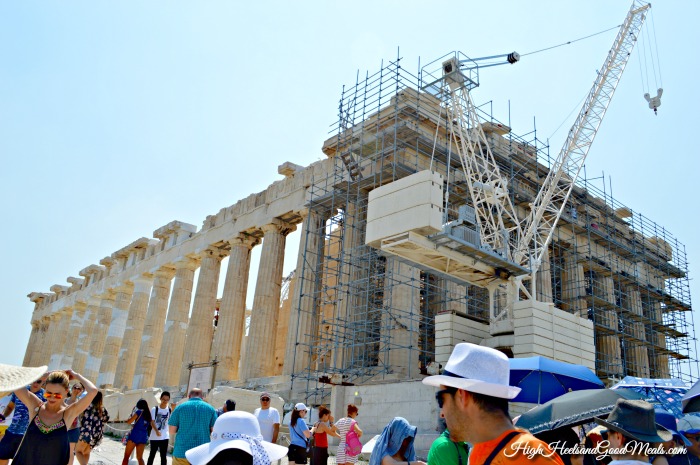 Here is the Erechtheion located on the north side of the Acropolis which was considered very sacred.  According to Greek mythology, this temple was dedicated to Poseidon and Athena. It’s said this is where a salt water well was formed after Poseidon struck his trident and where olive trees grew after Athena struck a rock with her spear. 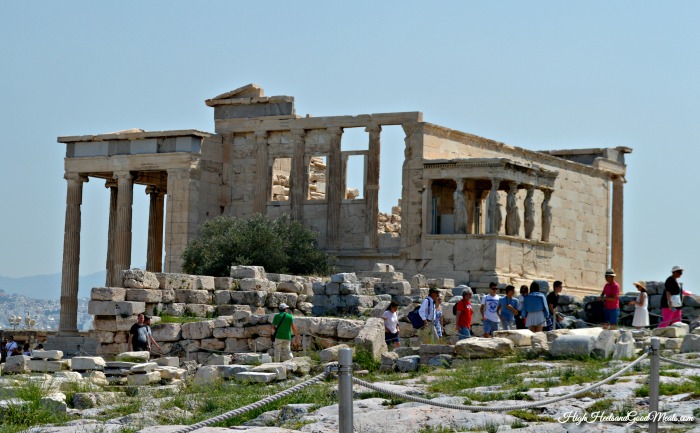 On the way back down I stopped to behold the Odeon of Herodes Atticus.  Located on a southwest slope of Acropolis, this is a steep slope theater that can house up to 5,000 people for music concerts. 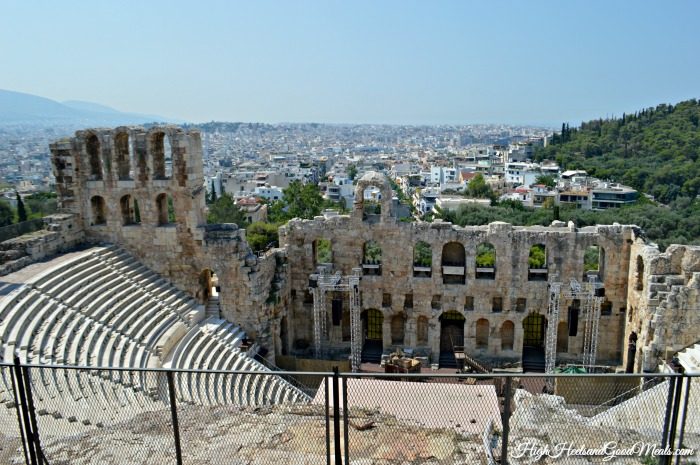 As a matter of fact, after it’s restoration in the 50’s, it is still used as a venue for concerts.  Artists such as Andrea Bocelli, Frank Sinatra, and Elton John have performed here. 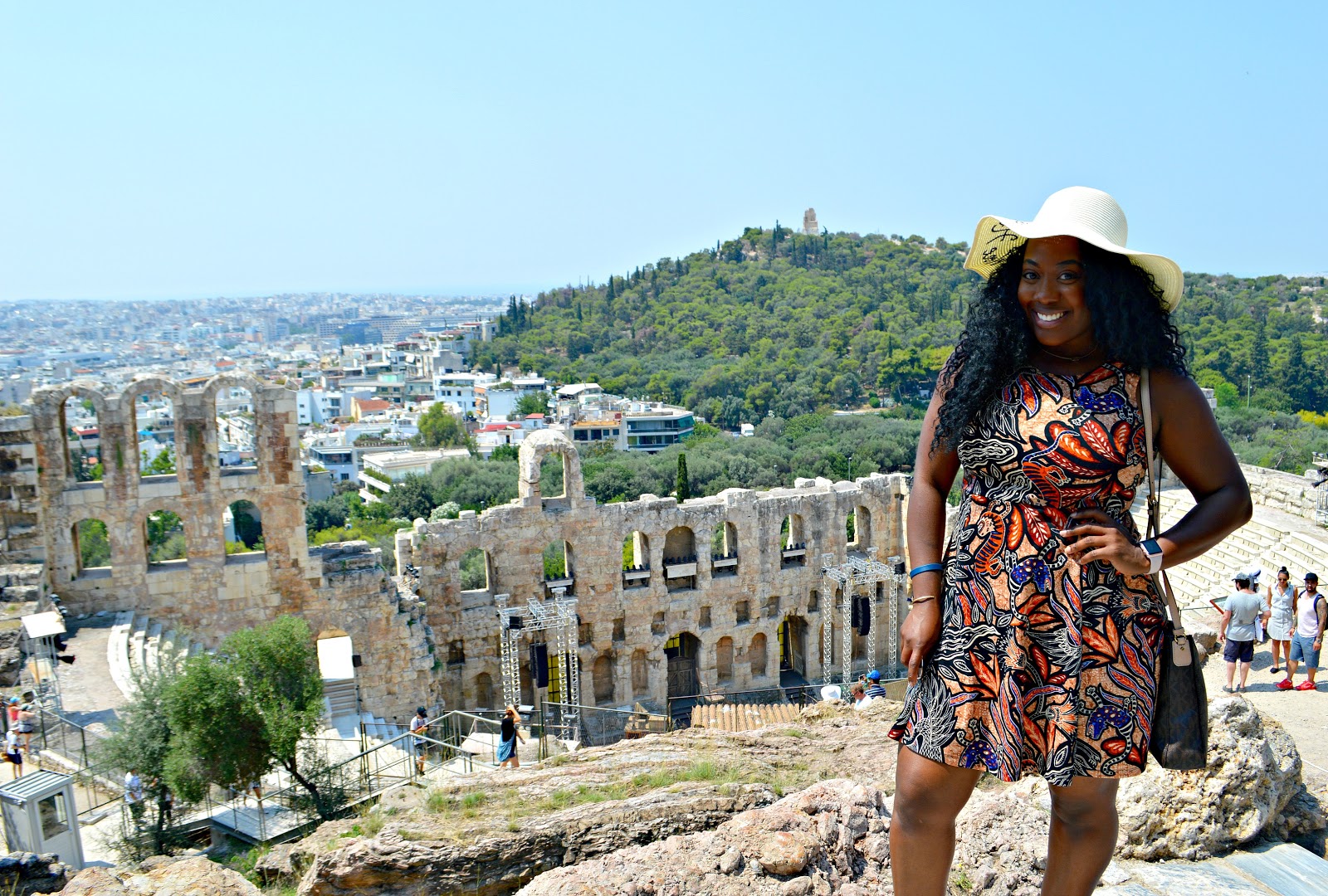 I seriously, can’t hardly wait until I can visit Greece again.  There was so much history and it’s an absolutely beautiful country…..and the food is good!

Have you ever been?  If so what was your favorite place to visit?  If not, where would you want to?